2014 Student of the Year Award 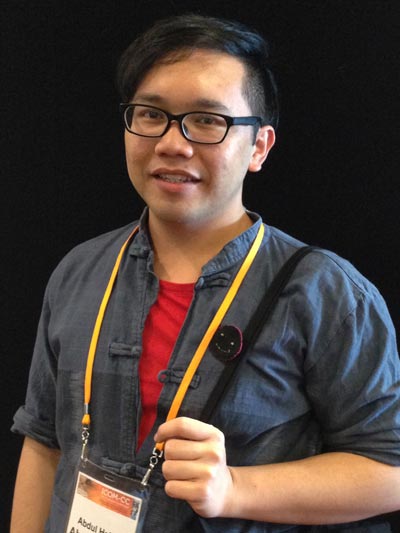 As is to be expected of a student of the year, Hakim has achieved outstanding academic results in his degree at the University of Canberra. His extra-curricula contributions to the university and the conservation profession have been even more outstanding.

Hakim is a committed member of AICCM, starting as the student representative on the ACT committee of AICCM, and moving into being a general member following his course completion.

Hakim initiated the new cultural heritage student body – the University of Canberra Cultural Heritage Collective – and as its president has generated a strong sense of identity within the group. In particular he has facilitated student involvement with collections at UC though the installation of the Curious Corridors exhibition, and the cleaning and improvement of collection stores.

Hakim also initiated contact between the custodians of collections owned and housed at UC, leading to the formation of the UC Collections Committee and the development of the Curious Corridors exhibition.

He has prepared an ACT Heritage grant application to assess the significance of the UC Geology collections, in collaboration with the Art Collections Manager.

Most recently he has been working as a research assistant on the project Connecting the Nation: Australia’s Aviation Heritage.

Hakim has an instinctive ability to relate to people and motivate them to come together to do new and bigger things. His unfailing enthusiasm, cheerfulness and bubbling head full of ideas have been the catalysts for a host creative collaborations and endeavours. We look forward to seeing what he will do next!

Diana Tay has made an outstanding contribution to the profession and high academic achievement in CCMC’s Masters by Coursework. Diana Tay has made a significant contribution to the ICOM CC 17th Triennial National Organising Committee in particular the Melbourne Special Events of Culture and Heritage, and supported and engaged with the cultural materials conservation profession in Australia and internationally.

As part of the ICOM CC 17th Triennial National Organising Committee (Regional engagement), Diana has co-ordinated the development and delivery of 10 events ranging from China-Australia: Cultural Materials Conservation programs, to a Keith Haring panel to Caps ReCap. She has also liaised with international organisations to gain sponsorship packages support for international delegates to attend the conference.

Diana’s professionalism and contribution to cultural materials conservation is also recognised as a founding member of the INCAA-Asia Pacific with its co-ordination, development of a media strategy and launch at Melbourne Special Events in September. Diana is CCMC’s international student representation and has undertaken internships at QAG-GOMA and the National Museum in the Philippines. Finally Diana’s Minor Thesis is developing conservation protocols for contemporary works of art in the Southeast Asian region.

Diana asks questions about the how contemporary art, culture and geographic place in Southeast Asia intersect and inform conservation decisions. CCMC is of the belief that Diana Tay will be a future leader for cultural materials conservation and will continue to make a significant contribution to the profession in Australia and Southeast Asian region.