In September I had the opportunity to attend the 12th North American Textile Conservation Conference (NATCC). NATCC is a biennial conference where conservators from North America and around the globe gather to reflect and share ideas and advancements in textile conservation theory and practice. The conference was held in the National Capital Region of Canada. The conference theme of Lessons Learned: Textile Conservation – Then and Now was a fitting theme for the venue as it was the location of the inaugural NATCC in 1997. 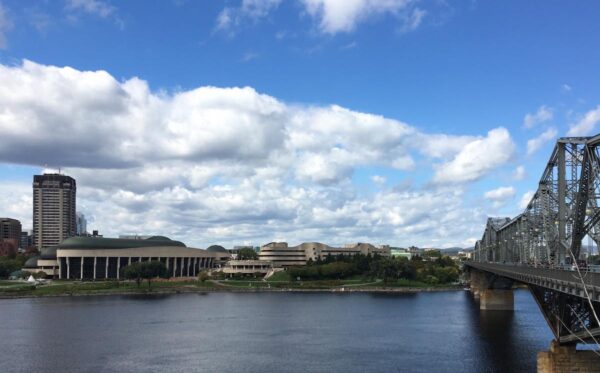 A view of Canadian Museum of History over the Ottawa River

Around 150 delegates gathered for a week to attend a range of professional development workshops, tours, and presentations held at various venues throughout the National Capital Region. During the final two days 20 paper and 10 poster presentations by authors from 10 different countries were presented around themes of community collaboration, revisiting treatments, historical reviews, and new approaches and technologies. Papers were delivered in English, French, and Spanish with simultaneous translation provided.

John Moses, Repatriation Supervisor at the Canadian Museum of History delivered the keynote speech, which he framed around Lessons Learned: Reconciliation. He gave an overview of the significant milestones on Indigenous rights discourse in Canada and internationally, citing the 2007 United Nations Declaration on the Rights on Indigenous Peoples (UNDRIP) as key. He suggested conservators can meet the spirit and intent of the UN Declaration by retrieving and recording the appropriate Indigenous-language names and terminology associated with objects being treated and describing their cultural setting for future generations of researchers.

The conference began with presentations around community collaboration, which highlighted how collaborating can enhance the understanding of and access to collections. Sarah Owens of the Anchorage Museum gave an overview of the Material Traditions program. The aim of this program is to preserve information and traditions by documenting the preparation and use of traditional raw materials such as: fish skins, cedar bark, and gut skin. Communities, artists, and conservators have benefited from this project as it has enabled a new understanding of material sources and their physical properties, and created opportunities for connection and exchange of information. Jose Milne presented how National Historic Sites of Canada have managed the increase in non-traditional events held within historic sites. She discussed the positive impact these events have had on attendance at the Parks with little to no negative impact on collections reported, which she credited the diligence of staff, and good planning and risk management.

Another interesting thread to the conference was how new approaches and technologies have created alternative pathways for understanding and presenting textiles. Amanda Holden discussed a case study examining the authenticity of a rare full 19th-century Chefchaouen Moroccan embroidery at the Indianapolis Museum of Art. A range of instrumental analyses were undertaken, which confirmed the textile had been constructed in the second half of the 20th century. It is now used as an education tool for the forensic examination of artworks. An investigation of historic finishes and cleaning residues on textiles in the Queen’s University Collection of Canadian Dress was presented by Sophia Zweifel and Gennifer Majors. Using UV fluorescence, polarised light microscopy, FTIR, and GC-MS, they were able to determine waterproofing agents on a 19th-century linen jacket and water-soluble stiffening agents on a white cotton dress with uneven oxidation. The authors argued that understanding possible finishes and residues found on textiles creates a deeper understanding of the physical and tangible history preserved on historic clothing. Corine Siegmund of the Reiss-Engelhorn-Museum shared a project involving uncovering the identity of an undocumented box of fragments found to be a Māori Piupiu skirt. Using images, she created a digital reconstruction uncovering its original construction and patterning. A video of her fascinating digital reconstruction can be viewed here.

Several papers explored the challenges and considerations when revisiting previous conservation treatments. A case study involving a non-traditional treatment of a 17th-century Flemish tapestry at the Fine Art Museums of San Francisco was presented by Anne Getts. This tapestry had heavily faded 19th/20th-century repairs that were structurally strong, but made the image difficult to interpret. As the repairs could not be removed the faded areas were locally treated using a technique Getts described as ‘micro dyeing’, which was successful in increasing the tapestry’s visual legibility. Jacquelyn Peterson-Grace reviewed the retreatment of the fragile silk lining of a 1936 Schiaparelli Evening Coat at the Philadelphia Museum of Art. The silk lining had been previously treated using conservation stitching and these areas had exhibited further splitting. She reviewed her decision-making process and ultimately opted for a more interventive treatment, as the lining was integral to the overall structure and shape of the coat. The lining was removed and fully treated with an adhesive-coated crepeline. Christina Margariti and Tina Chanialaki presented their work on analysing old and new approaches to treating excavated textiles at the Hellenic Ministry of Culture. They compared two 5th-century textiles, one treated in the 1950s and one treated recently. The 1950s treatment had a high level of intervention, which erased potential burial evidence. The second textile was treated with less intervention due to the change in the value of evidential evidence textiles like these hold.

Underpinning the challenges in revisiting conservation treatments was the importance of documentation and the continued need for creating a detailed record of interventive actions for future generations of conservators. Sara Reiter of the Philadelphia Museum of Art discussed a project involving a past and recent treatment of a 10th-century shroud excavated from the Rayy silk road site. The shroud fragments underwent treatment in 1961 and each piece was treated differently. The author described how she used past treatment documentation to unpack the decision-making process and the impact on the current condition and subsequent treatment. Emma Schmitt discussed treatment of a thangka collection treated in the 1970s and 1980s at the Denver Art Museum. She outlined the reassessment and retreatment of one thangka entitled, Life of Buddha. Each step of the decision-making process of the reassessment was thoroughly documented, creating an outline for future treatments of other thangka in the collection.

As Michaela Keyserlingk, chair of the inaugural NATCC conference, reflected in her opening address, the original vision of NATCC was to create a space and time for conservators to acknowledge each other’s idea and approaches and most importantly learn from one another and add to our knowledge. The NATCC has certainly stayed true to this vision and I hope it continues to do so. Special thanks to all who shared their work and to the NATCC board and the local committee for organising such a fantastic conference. The 13th meeting will be in Nashville in 2021 with the theme of Outside Influences.