During the 20th and 21st centuries artists began to experiment with film and sound in their art practice, as many contemporary artists do today. As a result, conservators work to preserve this material along with the large collections of audiovisual material found in archives, libraries and as documentation in institutions.

Conservators specialising in this area identify recording formats and the associated obsolete technologies. In many cases the content, rather than the carrier – the physical object used to record information – takes priority in the conservation process. 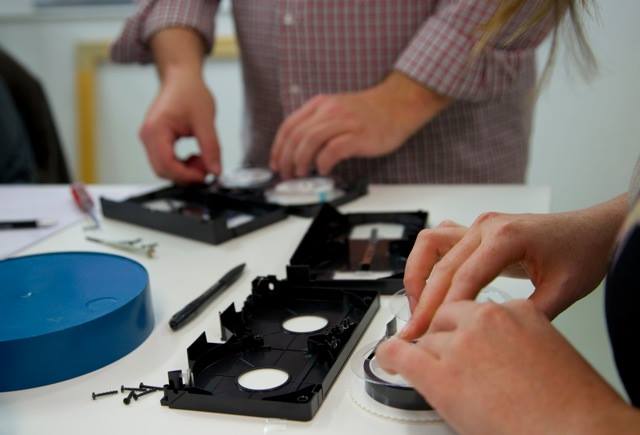 Audio material is particularly vulnerable to damage caused by poor handling, by badly maintained or malfunctioning equipment, or by sub optimal storage. Film such as polyester-based, cellulose nitrate and cellulose acetate require special handling. Motion picture films consist of silver particles or colour dyes that are extremely sensitive to heat and humidity. Good storage is essential for long term preservation.

Many analogue recording technologies from the 20th century have become obsolete. This causes particular difficulties for the conservator, especially when the manufacturers who understood how to create and operate the equipment are no longer in operation and parts cannot be sourced. In these cases best outcomes are to migrate the contents or emulate the original carrier.

Digital recording systems are also unstable, although international institutions have worked hard to establish protocols and preservation standards to ensure material is stored according to best practice. This incorporates the use of preservation metadata – ‘data about data’ – designed to ensure the technology supports future preservation strategies.

When the carrier has become obsolete or have deteriorated beyond repair, decisions are made on whether to duplicate, migrate or emulate the content to a stable digital format.

Involves the re-recording of film or audiovisual material onto another carrier of the same format. Duplication is used in the creation of a replica copy for preservation or access purposes, such as the transfer of audio from a cassette tape to another cassette tape.

Is the re-creation of the obsolete technology or hardware on a new operating system, simulating an experience of the original media. This is often used for the conservation of early video games.

AICCM has two Special Interest Groups for those interested in digital and audiovisual conservation, Electron and Photon. Join these groups, contribute to its activities, or speak to a specialist conservator.

Need a conservator? Find one here.