2015 Conservator of the Year 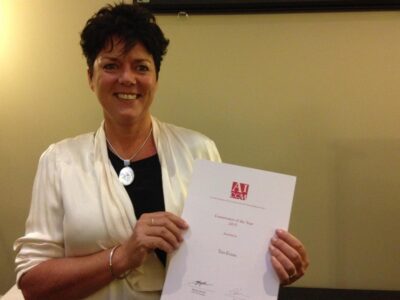 In preparation for the Museum of Brisbane’s blockbuster Costumes from the Golden Age of Hollywood exhibition, which went on to win the ‘Best Temporary or travelling Exhibition’ award at the 2015 Museum and Galleries National Awards, Tess treated over  70 costumes and more than a dozen props and accessories, demonstrating extraordinary problem solving abilities and a deep commitment to the project. She went on to present several hands-on conservation public programs, all of which were sold out events that highlighted the role and value of conservation to the visiting public. The award selection committee commented on Tess’s ability to work within the time and staffing constraints of the project, her excellent public engagement and the increase in conservation’s public profile as a result of her excellent work.

In 2011, Tess began a two-year sabbatical in UK, researching bio-deterioration of cultural materials and attained an MSc with Merit in Museum Studies from Leicester University in 2014. During this time, she completed her ICON Accreditation, lectured for the BA Conservation course at the Camberwell College of Art, University of London and volunteered in the V&A Conservation department, assisting the Exhibitions Mounting team.

Since returning to Australia, Tess has mounted some significant exhibitions: ‘Orry Kelly, Dressing Hollywood’ at the Australian Centre for the Moving Image in Melbourne, ‘Slim Dusty Collection’ at the Slim Dusty Centre in Kempsey and of course ‘Costumes from the Golden Age of Hollywood’ for Museum of Brisbane. Tess is currently working on ‘Marilyn Monroe’ with Bendigo Art Gallery.